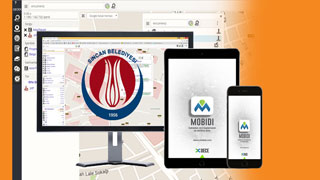 The Municipality of Sincan uses GEODI and MOBIDI solutions for different requirements of its units with a large number of users. Certain cases are available below. To see our story of success making it to the news on national media.

The Municipality of Sincan has been using E-BYS and DYS software for a long time. Millions of pages in the municipal archives were scanned and transferred to the electronic media within this period. However, due to the different software solutions used over time, the documents were stored at different locations.

GEODI makes access to information way easier by providing a single point of access to all documents. It has resolved the problems that make it impossible to search such as different forms of plot-layout data that are inaccessible by conventional means or incomplete indexing due to its high cost.

Updating the map generated by GEODI based on the query criteria has also offered a very important decision support instrument. This makes it easier to access the information on the senior management unit activities, thereby improving the service quality with better decisions.

GEODI helps The Municipality of Sincan give complete and fast responses to the information requests made by the public authorities, courts, and citizens.

Despite the fact that the unit archive was substantially scanned, it was not possible to access a required document. GEODI has made things easier by automatically finding data such as Personal Names, TR Identity Numbers, Budget Items, Companies, Account Plan codes in documents, directing the user to the information they need, and making such information accessible from anywhere with its query speed and mobile application.

Besides, its capability of processing plot-layout expressions in real estate tax documents and generating maps from such documents has allowed positional analyses.

There is a large digital archive that is made up of such materials as photographs and videos are taken for promotion by the municipality. A quick access to a certain file in those data is a crucial need.

The department observed that GEODI, which was already used in the municipality, met their expectations while it was about to purchase a program developed for this purpose. It enables the users to mark the items such as individuals and facilities on photographs and videos thanks to the note-taking feature of the software.

Features offered by GEODI such as annotating a certain time span of a video and playing a video from the annotated time have made it easier to access specific information. Photographs containing the GPS data or files tagged with a location name are automatically positioned on GEODI map. It is also possible to see the locations of intensified activity based on time.

GEODI also captures all news and comments on news sites and social media of the local and national media. It classifies and archives such data. The relevant units take action by following such notifications.

Municipal departments perform most of their activities in the field. The staff of the Departments of Police, Parks and Gardens, Technical Works, Public and Financial Works record such activities with MOBIDI installed on their phones.

Customizable interfaces of MOBIDI allow it to generate forms of information for each activity, archiving the complete status in the field by audio and video records. MOBIDI automatically sends such data to the center when wireless Internet access is available. Administrators follow the activities and communicate their decision to the staff through MOBIDI. These records constitute evidence in case of objections.

We have seen how GEODI and MOBIDI can be useful for many sectors. Press and Public Relations is one of them. Whether you are responsible for press and public relations in a ministry, a holding, a municipality or a firm;...

Our Digital Footprints are everywhere, we leave traces in everywhere we go. How can one determine thousands of files inside thousands of computers in Corporations and Businesses and information inside data? The personal data should be...

How can multiple applications and databases come together?